Mark is still on the road and check his blog out for this amazing journey!!!!! 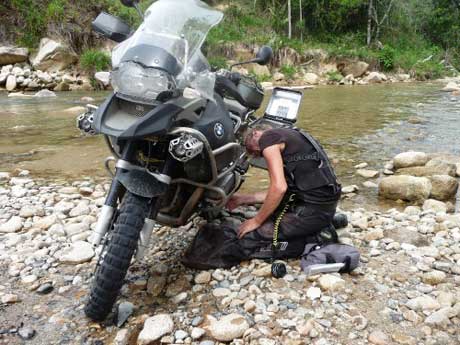 I met Mark Gutteridge in Popayan, Colombia (South America) while staying at the Hostel Trail. He is from the United Kingdom and has been on the road for about 10 months now. He started his journey in Alaska and is now in Colombia, South America.

He has a blog that he tries to keep updated as often as he can. If you care to read about his adventure then go here http://blogs.statravel.co.uk/sundance.

While in Lago de Atitlan, Guatemala he was robbed by some considerate dumb thieves. Mark faked he was getting ill and they offered him some water and gave him his “empty” wallet back. He convinced them that he did not have the keys to his side luggage compartments. They also gave him his jacket back so he could stay warm on the road.

But all in all Mark told me he is having the time of his life. From South America Mark is then heading to Africa. So take a look at his site and watch his adventure unfold.